Throwings knives are always going to be cool. There is just something alluring to the human mind about being able to whip a knife out of its sheath and with a solid thunk, getting that knife to stick into a target.

Technically speaking, you could throw a steak knife or a combat knife for that matter, but that is a thrown knife. Not a throwing knife.

Throwing knives are designed in a specific way due to the physics involved when the knife is in the air, rotating end over end, and spinning.

So I’m going to cover these basics real quick before we get into the good stuff.

Reviews Of The Best Throwing Knives From Our Research

Smith & Wesson has a whole selection of sharpened steel objects to throw that are available for your perusal. Given their experience with making knives, you can be sure that you are going to be getting your money’s worth with any pick from this selection.

If you are a beginner thrower these sets will absolutely be a great value buy for you. With the quality and design of these knives, they will carry you pretty far into the knife-throwing world.

The Smith & Wesson Bullseye products include:

Each of these knives comes in a set of three with a nylon sheath that can hold the whole set of three. While these are minimalistic products, being completely steel with no sheath, they do have hole placement available so you can wrap them in 550 cord if you’d like.

The weight of both the 8” and 10” knives is superb, at a solid pound and a half you will be landing very satisfying sticks and will be sure to get some great distance out of them.

These throwing knives are the real deal.

If you don’t like the knives, you can always give one of those axes a swing. 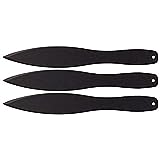 If you are looking for something a bit more sizable and capable of being thrown further, then check out this 3 pack from Cold Steel of 12” throwing knives. Each of these knives weighs a little over a pound at 17 ounces.

Not quite as heavy as the above Smith & Wesson products, but heavy enough.

Being this hefty means that you are going to deal with very few issues from any wind, cross breeze, or otherwise. These knives are made from 1055 carbon steel and a durable weather-resistant black coating, ensuring that you will be throwing them for years to come.

Each knife also comes with a lanyard hole punched into the pommel of the blades, giving you a prime location to attach a lanyard for easy carrying. 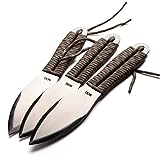 The SOG Fling Classic set of throwing knives are made for throw often and hard being made from durable 3CR13 stainless steel. The knives have a broad spearhead edge giving you a larger cutting surface for landing your throws.

The handles are wrapped in 550 paracords, which can be unwrapped and used for a variety of purposes when camping or hunting.

While these knives only weigh 5.4 ozs and are 9.5” they are built for competition, meaning that you will experience very little spin and a dependable rotation you’ll be able to count on to get your stick.

Another great thing about these knives is that SOG covers all of their products under a limited lifetime warranty. So if you find a crack or other type of defect in any one of these knives they will replace it for free. 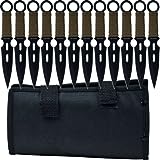 Say you might have gotten into the idea of throwing knives because you’ve been watching anime or ninja movies. Well, this is going to be the kit for you!

Whetstone Cutlery has this massive 12 piece Kunai-styled throwing knife set just for those who like that ninja style. Each one of the knives has a paracord-wrapped handle complete with the traditional ring on the pommel.

While originally designed as farming tools, kunai have recently undergone an evolution of sorts after being popularized by the media. Now they enjoy the spotlight as functional throwing knives.

This set of 12 Kunai-style throwing knives comes with a case that can hold all twelve, making this large set easy to keep up with and easy to take out for target practice. 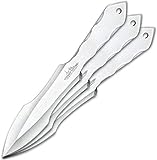 Gil Hibben is a pretty big name in the knife-making industry. So much so, that he designed a bowie knife named The Rambo III that quickly became one of the most recognized knives of the 80s.

As it turns out, Sylvester Stallone had several of Hibben’s knives, and when the time came for Stallone to be getting ready to shoot the movie Rambo III, the two went back and forth and landed on the design.

Hibben, handmade the Rambo III in his shop in Kentucky, and you can see it for yourself in posters of the old movie.

Hibben went on to continue making knives and the Gen III throwing knives are another love child of his. While not made in his shop by hand like The Rambo III, they retain his aesthetic properties and a high degree of attention to detail. 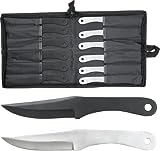 These throwing knives from Perfect Point have a drop point profile, which besides being a very inexpensive set for throwing knives makes them great hiking and hunting companions.

However, as throwing knives you may have to accommodate your throwing style to compensate. That is because of the asymmetry of the drop point. Regardless, since you are bound to lose a throwing knife here or there, you can’t beat this set for its pricing.

They are also stainless steel and about 8 inches long, making these medium-sized throwing knives, especially when compared to the foot-long whoppers from Cold Steel mentioned above. 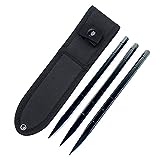 You can’t just have a conversation about throwing knives and not bring up shurikens. These throwing spikes are just that, while not what normally comes to mind when thinking of shurikens, these bo-shurikens were what naturally evolved from using kunai as throwing knives.

These will prove much harder for the average person to throw considering that most beginners only have a 20% stick rate when they begin. However, for a ninjutsu enthusiast, these will make a perfect addition to your collection.

What Makes A Knife A Throwing Knife

Besides what fantasies a movie or television show will have you believe, knives will spin end over end once they are thrown. In fact, it’s this rotation that will help you determine the right distance to throw from,

There are ‘no-spin’ methods out there, but there truly aren’t without spinning. Simply put these are techniques to get as much rotation out of a throw as possible in order to get a knife to stick on a lengthy first rotation.

Because of this natural rotation, throwing knives need to be consistent within your set for you to have any real hope of honing your skill past beginner level. This is why most throwing knives are sold in a set, it is simply best practice.

The consistency of a throwing knife is affected by its weight and balance, as the centrifugal force affects the length of the knife’s rotation in the air as well as its spin.

You want to avoid any throwing knife that weighs less than about half a pound. At that weight, you’ll only be able to get a decent stick in practice foam or cardboard, let alone getting a good throw at over 10 feet.

So let’s get into some of the best throwing knife kits for beginners.

I find throwing knives a great way to burn off stress and work out frustration. However, I’m not kidding when I say that if you pick up knife throwing you are going to lose one or two of them, especially in the beginning.

You will likely be getting a rebound 80% of the time.

So if you decide to pick up knife throwing as a hobby, I would strongly suggest making sure that you are throwing in a clean area that will low cut grass. Avoid public places like dog parks or forests, because if you lose a sharp knife in tall grass you can mess up a dog’s paws.

Not to mention, a lawnmower will turn that lost knife into the equivalent of shrapnel and that can seriously hurt a person and damage property, and knives are dangerous, to begin with.

If you are starting you’ll want to get a target block, such as one made out of foam, or see if you can snag a chunk of a tree from a local lumberjack. Many tree cutters will give wood away for free, especially in warm climates, and these sections let you throw into the end grain easily.

You don’t need a knife to be razor-sharp to get it to stick, and that will also cut down on the chances of you or anyone else getting an injury.