Knives are simple and ancient tools, but modern technology has made knife selection an absolute joy when shopping for a new knife nowadays. For instance, there are assisted opening knives, gravity knives, ballistic knives, and the amazing and wonderful world of OTF knives.

In case you aren’t too familiar, OTF means ‘out- the-front.’ This means that the blade of an OTF knife rests inside the handle and exits through an opening on one side of that handle. How the blade exits the handle can either be mechanical, assisted, or gravity operated.

Regardless of how the blade operates OTF knives have a certain glamour about them that makes them attractive to many people, even if they aren’t collectors.

This type of knife chassis has several different subcategories, and a lot of the reason behind that is due to laws governing this style of knife that have been passed over the years. Once upon a time, mechanical switchblades were made illegal due to the opinion that they were weapons favored by gangs.

In the past two decades, many of those laws have been repealed or aged out, opening up the whole gamut for enthusiasts and collectors alike.

Our Top Picks Of OTF Knives

Reviews Of The Best OTF Knives From Our Research 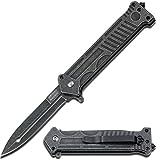 So taking my statement about cool factor and throwing it out the window, The Dirac by Microtech is just that, a really cool OTF knife. However, Microtech is a company that prides itself on its quality of manufacture so I have no problem getting the cool factor out of the way first.

The first line of their mission statement is, “Our mission is to never compromise…” so there you have it.

Simply push the slide to extend the blade, and pull ball the slide to retract the blade. An engineering marvel that will absolutely make you feel like a BAMF.

Besides only requiring one hand for operation, the Dirac has a very slim profile, with a double-edged blade length of 2.92” and an overall length of 7.25.” This OTF knife can easily slip into your pocket with its deep-carry clip and stay out of sight and comfortable.

An added plus, the butt of the knife has a glass-breaker.

If you are looking for an OTF from a reputable company that isn’t going to break the bank, then you always have Smith and Wesson. A company with a longstanding history in products designed for the safety and security industries whose reputation hinges on the fact that their products defend and save lives.

Unlike the Dirac this OTF knife is assisted-opening, so while it has the same top-mounted slider it is not fully automatic. Meaning that once the slider is engaged to a certain degree a spring-loaded mechanism will engage the blade and launch it into its fully extended position.

Once the blade is locked in place, the blade must be manually disengaged from the lock by pushing a switch, located at the base of the blade, and the blade is manually retracted by pulling the slider back into its firing position.

So if you live in a state where owning an automatic knife is illegal but you can’t go without a one-handed OTF...

A nice safety feature of this OTF is that there is a safety switch when the blade is in its firing position. This reduces the chances of an accidental misfiring of the blade when it is in your pocket. While your femoral artery rests inside the pelvis and femur, an unfortunate misfire would not be pleasant.

The blade length is set at 3.6” but you have a choice between a double-edged spear-tip or tanto blade profile. Another customization choice you have is whether you want it to be straight-edged or serrated.

The glass breaker is standard addition either way you go. 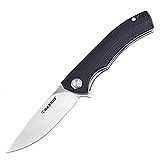 If you just love massive knives then this might just be the OTF knife for you. This automated OTF stiletto styled knife boasts an absolutely massive 5.25” blade. If that was not enough length the handle itself sits at 7.5” which brings the overall length with the blade out to 12.75.”

This knife borders being on being an OTF machete, holy crow, can you imagine the look on your coworker’s face at work when you pull this sucker out to use as a box cutter?

I see a meme in the making.

Besides being a knife that would actually look like a knife in Andre the Giant’s hands, this is a single-action automatic opening knife with a safety switch. After the safety is disengaged, the blade with fire with the simple push of a button which also doubles as the blade lock.

The blade must be manually retracted, however.

Paragon offers this knife in a wide degree of aesthetic and functional options. From the double straight edge, serrated on one side or double serrated edges, clip point, spear tip, camo handle to your choice of the rainbow.

You get to have it your way with the Paragon Estiletto, which I imagine is what a mugger would say when you whip this out. 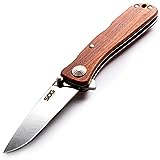 The Gravit-E is your more traditional type of OTF knife. Remember earlier in the article when I spoke about the German Paratrooper knife the Fliegel-Kappmesser? Well, the Gravit-E functions in the same way.

This is a gravity OTF knife which means that the blade is extended by either letting gravity pull the knife out or by swinging the blade out. You simply push the locking lever and give it a swing. Retracting the blade is just as simple, just push the same lever, point the blade up and it will fall back into the handle.

Of all the OTF knives listed in the article, this one is by far the most simple. There are no complex spring mechanisms to worry about. The biggest issue you may have to deal with when using this knife is if the blade somehow comes off the track.

The blade is a single-sided straight-edge spear-tip profile at a length of 3.75” with a handle at 4.75.” The clip of this knife lets just a little of the knife poke out of your pocket, but this means you won’t be digging around in your pocket to access it at all.

Because of the lack of a spring-loaded firing mechanism, this knife has the slimmest overall profile of all the knives on this list.

Due to the construction, simplicity, and profile of the AKC Gravit-E, if I were in the mood to shop for an OTF knife to last a lifetime, this one would be the one.

OTF knives were developed with those who needed a small compact knife that could be operated with one hand in mind. The origin point of OTF design starts back in history to the 1850s.

The put the utility of an OTF knife into perspective, the Flieger-Kappmesser was a gravity OTF knife issued to German paratroopers and flight-crew members with the idea of cutting oneself loose from parachute straps in case of entanglement.

Today OTF’s rank among one of the most useful utility knives for being able to be operated with a single hand. If you work in a warehouse, or drive a truck, or even as a construction worker, you’ll find a well-designed OTF knife an invaluable tool.

That being said, something to look out for when purchasing an OTF knife is its construction. Knives are used for either utility or self-defense, so basically, all knives, need to be made with heavy use and working strain in mind.

Because OTF knives have such a ‘cool factor’ attached they have fallen prey to many cheap manufacturers out there that try to cash in. Since OTF knives tend to have more moving parts, they are easier to break, so bad manufacturing can be mean the end of the road in a tight situation.

So I have taken the liberty of compiling a list of well-made OTF knives from reputable companies for you to peruse. Let’s get to it.

OTF knives are not a hugely popular style of knife. Due to their complexity, cost, and potential legality there are not a lot of manufacturers out there willing to invest in the design and manufacturing of all the parts necessary to make a quality OTF knife.

The companies on this list are some of the most trusted makers of knives and other products in the line of safety and security products. So if you are going to drop even a penny on an OTF knife you will know that with this selection, you’ll be getting your money’s worth.

I also can’t stress this enough, since automatic knives can carry a penalty of up to $2,000 and up to 5 years in the slammer, if restricted in your state, be sure to check the legality before purchase.