Of the people that use knives, chefs and hunters are my favorite. No two groups of people are more discerning or critical of the tools they carry with them into the job or field.

In a sense, even in today’s modern world, a knife can still be a life-saving tool. Maybe the head chef has had a bad day and needs excellence from his staff, and one bad cut on a steak is all it takes for someone to get canned.

Or perhaps a hunter got caught in the rain and the temperature is dropping and needs to make a fire now and all he brought with him was a magnesium fire starter. In either profession or hobby, knives still prove to be invaluable.

With that in mind, just as the arsenal of knives a chef has at his disposal, there is an equally large selection of knives for the particular hunter.

Dressing a duck is a much different task than field dressing a deer, and the knives used for each are also equally different.

So I’ll be going over the different types of knives a hunter or outdoorsman may carry with him or her into the field, their uses, and then a selection of some of the best knives of those types a person can buy.

Our Top Picks For Hunting Knives

Reviews Of The Best Hunting Knives From Our Research 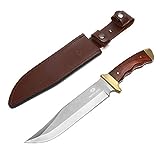 This bowie knife is a perfect specimen of its species. Surprisingly light for a knife with a 14’ blade, weighing in at a mere 14 ounces, this sturdy knife is easy to use when you need to skin and dress game as hardy all an alligator.

For the surprisingly affordable cost you get:

Mossy Oak, long being providers of premium outdoorsman equipment honestly outdid themselves with this showpiece of a knife, especially at the cost. 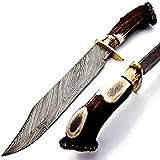 If you aren’t scared to splurge a little on a knife that you plan on using for the rest of your life and have settled on the bowie format, the eyeball this tall glass of water my friend.

Damascus steel is an ancient way of forging steel whose recipe was once long lost to the annals of time. At the time, Damascus steel was without equal and was easily identifiable for the iconic patterning on the steel blade.

However, due to the combination of modern forging techniques, with uses super steel that the ancient blacksmiths would marvel at today, Damascus steel has seen a revival.

This knife by Mid American Cutlery is a knife that will speak volumes about its wielder just like the ancient blades did.

While definitely a knife for the dedicated and enthusiastic hunter, it should be noted that Damascus steel is high carbon steel, which is what gives it the beautiful pattern.

This means that it is susceptible to rust and corrosion if not regularly cared for. It is recommended that when it isn’t in use to oil the well well and regularly.

In the tradition of being an innovator in the field of hunting knives, the 110 Folding Hunting Knife is a prime example of the quality expected, and those before us expected, of a Buck knife.

While the Hunter’s Folding Knife is no monstrosity such as the Bowie knife, it has found great success since its inception. Easily slipping into the pocket, this knife is also a great choice for everyday carry as well as being a dependable hunting companion

When it comes to hunting this sturdy knife allows for a hunter to easily skin and field dress a deer for later processing. When it comes to wild game such as deer, rabbit, or birds this knife can do it all and more.

Another knife from Buck Knives shows its dedication to be on the leading edge of the knife industry. This folding knife shows that they aren’t scared to step up to the plate and get right with the times so-to-speak.

With one foot in the past and the other fully in the future, this take on their folding hunting knife is complete with the introduction of a gut hook and modern materials.

This many advertisers in the world today would put the word “tactical” in front of Froot Loops to increase its performance in the modern market, Buck Knives means it.

What you get with the 660 Pursuit Folding Hunting Knife is:

While the Southern proverb, “Don’t fix what ain’t broke,” is something to live by, Buck Knive definitely improved on what did. 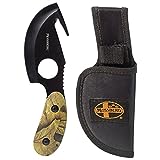 Mossberg Fixed Blade Knife, All in One Skinning Knife with Gut-Hook, for Hunters and Outdoors Enthusiasts
Check Deals on Amazon

Mossberg yet again steps up to bat bringing with it to swing it’s all-in-one fixed blade hunting knife.

This knife has a combination of the features of Buck’s Pursuit Folder as well as being a fixed blade.

This knife offers you:

If you are currently on a shoestring budget and looking to try out something new, you won’t be taking a risk on this knife.

This is another small skinning knife that is similar enough in design to Mossbergs offering that there isn’t much to go on about. However, it’s for those that love their tools to have a little personality to go along with their functionality.

Definitely a small package with a big personality, even if you find out you’d like something a bit heftier, this skinning knife will complement any hunter’s collection nicely.

Bowie knives are huge and supposedly made by the once-notorious knife fighter named James Bowie around the early 19th century.

However, its origins are lost to the murky depths of history, so there is an equally murky consensus as to the origins of this particular style of knife.

Regardless of its history, the bowie knife is useful for some hunters who go after games with particularly thick skin or armored plating.

Which may beg the question: Armored game?

Yes, an alligator is delicious for those of you who haven’t had the chance.

Wild boars are also notorious amongst hunters for their thick, armor-like skin. Which is where the massive and heavy bowie knife comes into play.

While bowie knives are considered too large for your atypical hunting knife, it should be noted that they were and still are used as butcher’s breaking knives. Their large size and lightweight is just at home field dressing game as it is in a commercial kitchen.

So not only will this knife one its space in the field but can will also save you money in your own kitchen cutting ribeye steaks from a prime rib.

Buck Knives: The Best Knives Hunters Can’t Get Enough of

Buck knives are also another knife that has its history founded in the days was the frontier was still a frontier.

In 1902 by a man from Kentucky named Hoyt Buck made the first buck knife, and while not made for combat, Mr. Buck’s knives saw use during WWII when such knives were desperately needed.

Later, Buck’s knife-making business was carried on by his surviving family, who ended up creating the first folding hunting knife.

The Buck Knives company has since carried on this tradition, focusing on high-quality knives for the avid outdoorsman.

These knives play as the intermediary between the two traditional choices of a bowie knife and a buck knife.

In modern hunting not a lot of people fully dress down their animals with processing stations often being close by to hunting grounds. However, field dressing is still a must.

Which is where skinning knives step in to help.

Regardless of what knife you end up choosing, it is best to plan out your hunting trip. If you are not a big fan of processing your own game then make sure there's going to be someone around who can help.

Also, remember whatever knife type you choose might take some getting used to if it is new to you.